Last week I started a new job as CTO at OPEN (the online progressive engagement network). I'll be full time from early October. I'm really excited about this role, working with an international team to support our member organisations with technology and learning, in a very collaborative way:

Every day, OPEN groups enable millions of citizens take action online and offline. As progressive organisers and activists, they face multi-national challenges like climate change, bad trade deals, and eroding access to democracy. Yet the most effective means for citizens to meet these challenges are almost always at the national level, changing public policy, media narratives, and their communities.

Each OPEN member organisation is an independent group working within its national context. But we problem-solve and innovate together. We share research, tools, and tactics that build our collective power. And we form bonds of trust and respect that allow our disparate organisations to become stronger together.

I've been gradually getting through Logic's Care issue from August, which explores alternative imaginings of technology. There's Mar Hicks on COBOL, and why it gets wrongly blamed for systems failure; organising by European warehouse workers at Amazon Workers International, the experience of being on-call for tech infrastructure, a look at computerised therapy through the lens of game design.

A brief but good thread from Tim Hughes:

Covid entirely aside, this Government has appointed a panel to examine Judicial Review, has issued a white paper on ‘planning for the future’, is reviewing Police and Crime Commissioners, and forthcoming plans to restructure local authorities to ‘devolve power’, using data to micromanage everything. There’s a lot to do… plus the afterthought of fixing social care.

I do not pretend to offer a coherent narrative here, but simply note that, again and again, a pattern emerges: Boris Tribute Acts.

Sam goes on to detail areas where you can see Boris Tribute Acts in practice, such as Police and Crime Commissioners, and local authority planning.

Tempting as it will be for civil society to focus on one silo, and the above structure shows how disconnected they can be, in any of these issues the primary problem is the successors and imitators of the current Government: the Boris tribute acts who lack the sheer chutzpah and intelligence of their role model.

A net assessment of all changes suggests only some will go forwards – Do you trust Boris Johnson’s Tribute Act to adequately fund your nursing home? What does this Government prioritise?

This Government has shown that it values itself over the law that underpins public trust in Government. If it succeeds, the Boris Johnson Tribute Acts will copy it.

Farewell to the Sunlight Foundation after 15 years.

Frequent flyer schemes with US airlines are startlingly valuable [FT, paywall] "Valuations recently put on the loyalty schemes have exceeded the market capitalisations for the airlines themselves — implying that investors value the business of flying passengers at less than zero."  HT Ben Dansie.

Michelle Thorne has written up some notes on the Internet and Climate Panel of the UK Internet Governance Forum:

Myles Allen, a leading climate scientist from the University of Oxford, held a keynote where he talked about the Net Zero challenge and what the tech sector could be doing to address it... [Allen recommends:]

... the people and organizations who build and steward the internet must first understand the climate impact of these networked systems, and how to change it.

Threats to a sustainable internet:
* centralization of power in tech
* increased energy consumption and dependency on fossil fuels
* misinformation and climate denial
* lack of understanding among professionals about environmental harm, and meaningful things to do about it
* use of AI/ML in oil extraction

The reality is that a renewable transition will happen. But the tech industry needs to accelerate that transition—speed is justice. We need to make our own commitments, innovate, and account for carbon legacy, build devices for longevity and right to repair. Meanwhile, divest and keep fossil fuels in the ground.

A reflective article by David Finnigan: it turns out disasters don't actually change people's minds about things like climate, after all:

Watching bushfires rage across the west coast of the USA recently has felt like a horrible deja vu, taking me back to the Australian bushfires nine months ago...

And just like in Australia, the political impact of the worst fires in the country's recorded history has been... negligible.

One thing I was always sure of was, when people were faced catastrophic climate shocks, they'd accept the truth of what scientists have been talking about. It might come too late to avoid the worst of the impacts, but at least we could start being honest as a society about what it is we're facing.

In January this year I finally realised that I was wrong. And it genuinely shook me.

... Boho began working with government policy-makers and businesses, including fossil fuel and mining companies. Our interactive show Best Festival Ever was both a primer to sustainability science concepts (feedback loops, tipping points, resilience) and a management training / team-building workshop.

We carefully curated the language of the show to avoid using phrases that would disengage climate skeptics. 'Sustainability' was okay, 'greenhouse gases' was not. Over the 2010s, we toured the work to boardrooms around the world; from Shanghai to Sydney, Singapore to Stockholm, sharing it with over a thousand people and engaging them in post-show discussions about climate and sustainability.

But did we change anyone's mind? We had a lot of great chats with fascinating people, but I don't think we made anyone rethink their position on climate. We were often unsure whether we were infiltrating these organisations to open them up to a climate conversation, or if they were co-opting us in order to appear open-minded.

... So if art can't change people's minds or persuade people with different political beliefs, what use is it?

No river in England has achieved "good" chemical status. "Every river in England is polluted and only one in seven of them meet a “good” ecological standard, according to the latest government figures."

Jeni Tennison has been digging into what the data can tell us about Covid-19 cases in England, and writing up how she's done it. Lots of interesting graphs there.

Thread about how broken search results are (and why): 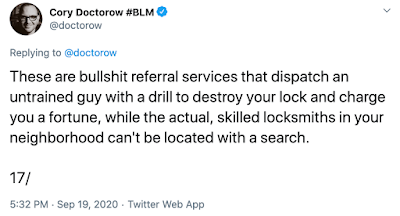 The ad ecosystem is problematic: 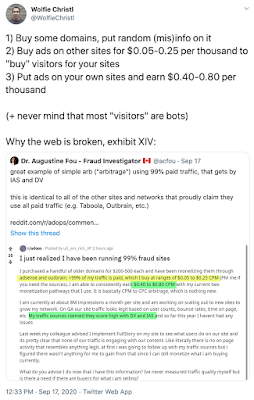 And we aren't doing a great job of regulation:

I enjoyed last week's Talking Politics with Jill Lepore, looking at data analytics in the 1950s(!).

Who is peeking over your shoulder while you work, watch videos, learn, explore, and shop on the internet? Enter the address of any website, and Blacklight will scan it and reveal the specific user-tracking technologies on the site—and who’s getting your data.

A fascinating delve into CAPTCHAs - and memes - as political classifiers by Brian Justie:

This convergence between CAPTCHAs and memes suggests that the history of one can shed light on the problems presented by the other. Looking at both how and why CAPTCHAs have evolved since their inception in the late 1990s can reframe the contemporary concern over bots, misinformation, and the pervasive discourse of reaction online. While it may appear as though differentiating between humans and bots is an increasingly straightforward and dependable technical operation, the evolution of CAPTCHA suggests otherwise. The means and the ends associated with confirming one’s humanity on the internet have changed significantly, but earning a place as a valid participant in online discourse has never been more fraught.

On the financial infrastructure underpinning agriculture - Rana Foroohar in the FT (paywall):

Of all the many problems caused by Covid-19, three of the most visible have been food insecurity, the demise of small businesses and asset market volatility.

All of those things might be poised to get worse, thanks to an unexpected but important financial shift. Big banks, including ABN Amro, ING and BNP Paribas, are either pulling out of commodity trade financing or scaling it back. This will leave a funding hole for some farmers, agricultural producers and distributors, as well as grocery chains and other small and medium-sized companies that represent crucial parts of the global food supply chain.

Civic Hall launched their new guide to emerging technologies in the public interest. I've been eagerly awaiting this because whilst there's lots of 'tech for good' out there, very, very few groups/events/projects are about emerging technologies.  There's a great slide deck with the key recommendations.

The Urban Institute have explored how data can show up inequalities with a "Spatial Equity Data Tool." Thanks to Leigh Dodds for sharing.