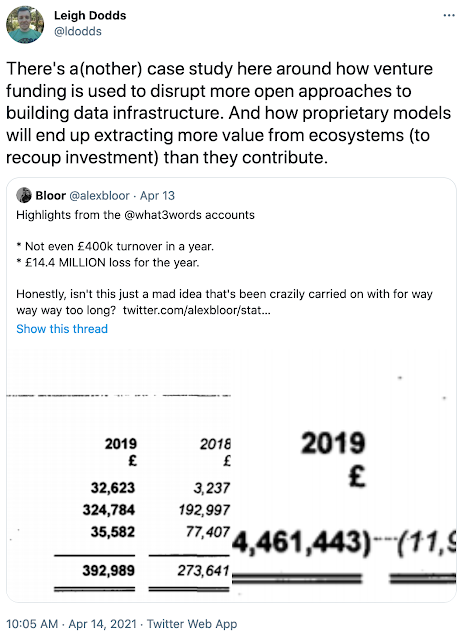 Now Play This 2021 happened! It was lovely, from the not-flying pre-festival experience of an economy class seat flight sim, to a neighbourhood walk with musical accompaniment to close the festival. Some of it is on YouTube now. I enjoyed the mellow alternative management-sim of Among Ripples: Shallow Waters (rebuilding and maintaining the water ecosystems), and the visions of the future - particularly the mixed responses of the people of post-flood Venice 2089. Other highlights were thinking about the other side of things with games about "bad actors" , and the art concept of the Garden of Early Delights .   Maintain is hosting a darning workshop online on the 29th April  - an opportunity to learn about visible mending and the experience of clothing repair.  I continue to be annoyed about What3Words, but this is now becoming more of a thing for others. As well as the financial/sector commentary here, there's been more people finding examples where the words are in fac
Read more 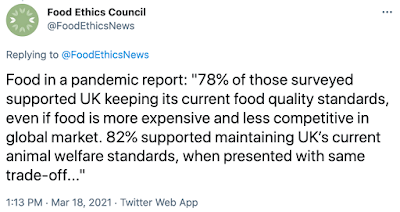 From a new report on UK experiences of food through the pandemic : https://twitter.com/FoodEthicsNews/status/1372536574269923330   If you are in the UK, you can see how polluted it is at your address - http://addresspollution.org/     https://twitter.com/xr_cambridge/status/1372818902036664320   Chris Giles writes in the FT [paywall] about the UK's failure to make progress on reducing the carbon burn of home heating. The Green Homes grant has flopped "because it is highly restrictive, only allowing energy-saving measures such as “secondary” improvements to windows and doors if combined with “primary” measures often inappropriate for older homes."Also - "there is a stealth tax on energy bills through the “environmental and social obligations” required from energy companies... these account for under 2 per cent of a typical gas bill, but nearly 23 per cent of electricity bills."  HT Chris Vallance -  https://twitter.com/radioproducer/status/13728265425905459
Read more 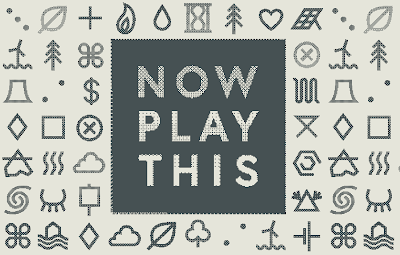 A dire warning reported in the Guardian: The climate emergency is already hitting “worst case scenario” levels that if left unchecked will lead to the collapse of ecosystems, with dire consequences for humanity, according to the chief executive of the Environment Agency . Warning that this is not “science fiction”, Sir James Bevan said on Tuesday that in recent years several of the “reasonable worst case scenarios” had happened in the UK, with more extreme weather and flooding. ... “The net effects will collapse ecosystems, slash crop yields, take out the infrastructure that our civilisation depends on, and destroy the basis of the modern economy and modern society. “If [this] sounds like science fiction let me tell you something you need to know. This is that over the last few years the reasonable worst case for several of the flood incidents the EA has responded to has actually happened, and it’s getting larger." David Finnigan on geo-engineering and personal moral
Read more 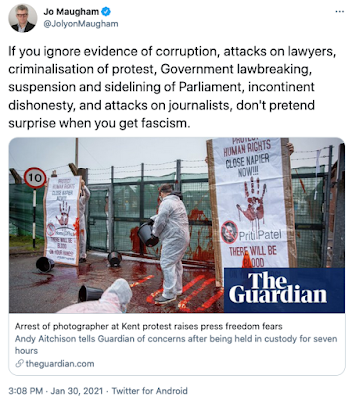 Thanks Adrian McEwen for the link to this clear depressing summary of UK government failures over 12months by Michael Head. https://twitter.com/JolyonMaugham/status/1355533287482138626 I remember the energy and drive when the UK hosted the Open Government Partnership in London in 2013, but we've not kept up: https://twitter.com/TimJHughes/status/1358433586848821248   Where should the UK invest in R&D? Tom Forth writes about R&D, transport, skills and growth. Check out the amazing talks from Wuthering Bytes 2019, now on YouTube.   It was, as ever, an honour to compere these incredible sessions. I shouldn't pick favourites, but Sarah Angliss on atomic gardening and Georgina Ferry on Lyons cafes and the first business computer were highlights for me.  I loved (ha) the thoughts in this thread of Chiara Acu's art - "in the spirit of waging love." Many thanks to Cassie Robinson for sharing these this morning :) There are so many good bits in Matt Stoller'
Read more 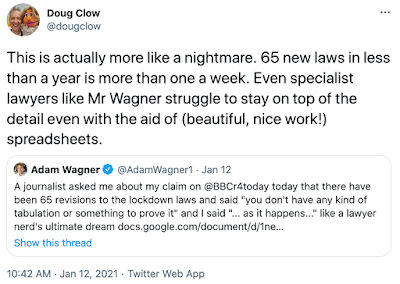 Check out the Met Office's review of 2020's weather: ...the UK’s third warmest, sixth wettest and eighth sunniest year in the UK national series, which extend back to 1884 for temperature, 1862 for rainfall and 1919 for sunshine. 2020 is the only year that features in the Top 10 ranking for all three. .... It is likely that, globally, 2020 was one of the three warmest years on record and that 2011-20 was the warmest decade. ...The UK has warmed by close to 1C, comparable to the global rise in average temperature.   February was the wettest ever for the UK, and the fifth wettest calendar month ever. It was followed by an exceptionally dry and sunny spring - the sunniest on record. What's the long range forecast? Relative to 1981-2000 average, 2020 was 0.93C warmer than average. However, the chart above suggests that, by the 2040s and 2050s, this would be counted as a cooler than average year. For rainfall, annual projections for the UK have a large range as men
Read more
More posts